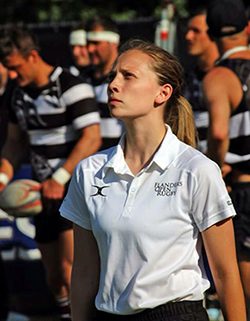 Kent Society are sad to say goodbye to Laura Pettingale, who has landed her first position as a fully qualified teacher in Northampton and, as a result, will be moving to the East Midlands Society. Definitely a case of our loss being their gain.

Laura has been with the Society for 4 years and has gathered a wealth of experience during that time – so much so that she has been recognised by the RFU as a potential elite referee. Things have definitely taken off for her in this past year.

She has received numerous RFU appointments within the women’s game and appointments have included: referee for the International Girls U18 game between England and Canada; AR for the Women’s England versus Ireland 6-Nations game; and also AR for the BUCS Women’s final – the two games both being held at Twickenham. Her 7’s and 10’s appointments have covered Amsterdam, London, Croatia, Belgium and Copenhagen.

We will miss her and wish her all the best as she moves on to exciting new things.