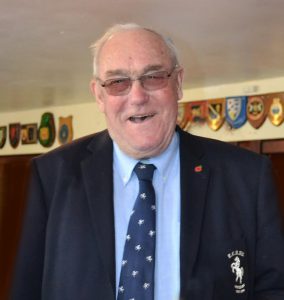 It is with great sadness that we pass on the news that John Carley, a past president of the Society passed away yesterday morning after a period of illness. John fought his illness with energy and commitment. He took great pride in grandson Matt’s rise up the International referee ladder having accompanied him on his first steps on the long journey from local junior games.

Up until recently John was regularly seen at matches especially at his beloved Betteshanger (now Deal – Betteshanger) and always had a few words of advice and encouragement for the referee, sometimes blunt but always accurate. We were all pleased to see him at this year’s Finals day at Footscray. He was indeed well known and respected much wider than his beloved Kent. Tony Speadbury well remembers John’s assessment of him on his first exchange to the county from Somerset.

John’s funeral  will be held at Barham Crematorium on Tuesday 18th December at 12.40pm.

We extend our deepest sympathy to all of John’s family.

Ben Wood – Referee in the Spotlight!